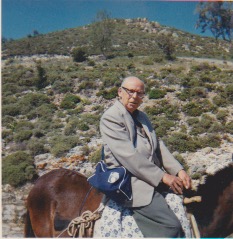 Our origins are in organising pilgrimage travel, dating back to 1948 when GE Houseley organised the first groups to the Holy Land. He had previously organised groups from his office and his church, and also led a respiratory cure group to Le Mont-Dore in France, where he himself was sent to successfully recover from the effects of gas while serving in the trenches in WWI. Throughout the 1950s and 60s the business expanded to include many church groups. ‘Eddie’s’ sons David and Philip joined, and retail Travel Agencies were added.

Prior to the 1970 Passion Play at Oberammergau, for which he applied for several thousand tickets, David travelled extensively to this beautiful Alpine village in Germany, and learned about the history, traditions and organisation of the Play. He thought it would be good if he put this down in a small book which would benefit his travellers, and so the first Pilgrim’s Guide was born. A guide to the Holy Land soon followed, and later, after the 1990/91 editions of Oberammergau and the Holy Land, Lourdes was added.

When he retired from organising tours, David, with his son Andrew, took over the publishing of the Pilgrim’s Guide books. One of David’s most experienced tour leaders, Rev. Ray Goodburn, agreed to become an author. The 2000 Passion Play saw record sales: we think that 25% of all visitors from English-speaking countries got to read our book! Lands of St Paul, which follows the pattern of HV Morton’s famous travelogue, was the fourth guide in the series, and was followed by Rome and Assisi in 2010. Pilgrim have had a web presence since 1998 – with a secure ordering facility – so we were quite an early adopter. In 2013, e-Book versions of the Holy Land (2010), Lourdes (2011), Rome and Assisi, and Oberammergau (the 2010 64-page booklet sold in the village during the Play) were released. They are available in ePub and ePDF through a wide range of online retailers, including apple, Kobo, Barnes & Noble, and amazon, and a limited number of e-lending sites.

Importantly, the series is updated with new editions, and we are currently working on the revised text and photos of Lands of St Paul, as well as exploring new possibilities. There are many more parts of the world that we want to write about and photograph, and with the help of an ever growing community of readers we will get there … quicker! To that end, we have the e-commerce side of the new site up and running.

This site uses Akismet to reduce spam. Learn how your comment data is processed.